A Visit to Barley Brown's Brewpub 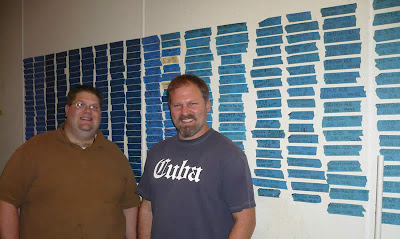 "The only true happiness comes from squandering ourselves for a purpose." ~William Cowper

October 17: Slept in till 9:00 or so. Penny made me tea and toast while I took a shower. She gifted me a cute little basket of homegrown potatoes from her garden including a mutant russet with three appendages. It was cold, windy and wet out, but we ran out to the brewery equipment boneyard in her driveway so I could assess the equipment that came with her new 4-bbl unitank fermenters.

Idaho has more Mormons per capita than Utah, and Penny said having a 12-foot or so tall copper combi-tank in her driveway had worked well to keep her neighborhood relatively beer-friendly.

The "combi" tank was bizzare. The top half was 2/3 liquor back and 1/3 mash tun. (Divided like pie pieces.) The bottom half was the kettle. I'm not sure how you could add hops, since you couldn't open the side-manway on the kettle without dumping boiling wort all over yourself. It's a steam system and Penny currently doesn't run steam. I wasn't too sure about that piece. I asked Penny if she could crane it into place on her brewery roof and shine spotlights on it so folks would see it like a beacon from the freeway.

The heat exchanger and small plate-and-frame filter showed much more promise. I recommended getting the heat exchanger cleaned and set up first so she could reduce her lengthy brew day by two more hours.

Then I took off west toward Oregon. A lot of southern Idaho is relatively flat, but the section of Idaho and Oregon between Boise and Baker City has huge rolling hills. I drove beneath the storm clouds and Oregon loomed sunny in the distance. 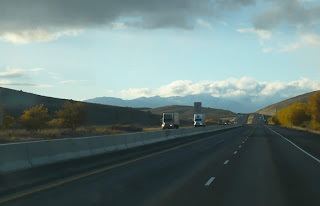 This part of Highway 84 is famous for wild horses. Most of them are dark brown with black mane and tail, and those are the wild horses I've seen before. I saw two mottled lighter colored horses among the dark ones today.

You can usually tell the wild horses because they stand together, often head-to-tail, as if they are looking out for cougar or other predators. Tame horses usually graze alone, either unaware or unconcerned about predators that may be lurking. I saw what looked like several wild herds on my drive today.

Ah, Oregon! The sun shines brighter, the air smells fresher, the music swells... Okay, no music since Colorado as Jon broke my radio antenna while trying to fix it. However, the point is that Oregon is awesome and I was so happy to cross the state line and see cars and trucks with Oregon license plates again. Although now I'm not so special, am I? Since I have Oregon plates too.

Cell service has been mostly non-existent since I left Denver, so luckily for my GPS system, I knew right where to go. I pulled into a vacant store's lot a street back from Barley Brown's, and went to put on a bit of makeup in the trailer.

As I locked the trailer, Barley Brown's Owner, Tyler Brown, walked up with a big smile on his face. He said it would be best to move Big Buddy to his house, so he rode with me the mile it took to drive there. I got a full tour of Tyler's house. Then we walked back to the brewpub.

Barley Brown's has been open for about seven years and Tyler remembers my first visit back then, because I was the first brewer to come and visit him. Baker City is a long way from most Oregon cities. In fact the nearest large airport is in Boise, Idaho. A lot of Oregon brewers didn't realize that Baker City had a brewery for a long time. It didn't help that the Oregon Brewers Guild, of which Barley Brown's is a member, put their "blow-up" map of Portland right over the eastern part of the Oregon map, effectively covering up Baker City and literally knocking Barley Brown's right off the map.

Tyler's parents used to run a Mexican restaurant at this location, but when a real Mexican family came to town and opened a restaurant, that was it for the Browns' Mexican place. Tyler still serves the old Chicken Fajitas recipe, and in fact the Mexican family comes in and orders it almost every Sunday, telling Tyler, "Your chicken fajitas are better than ours."

When the family's Mexican restaurant went under, Tyler, a homebrewer, convinced his parents to sell him the restaurant so he could open a brewpub. He contacted tank manufacturers, but JV Northwest wouldn't even give him a quote, saying, "Baker City is too small. You'll never make it."

That spooked Tyler enough to downgrade his equipment expectations from a 7-bbl system to a 4-bbl system. Elliot Bay manufactured the brewing equipment, and Tyler has proven he's no flash in the pan. He's limited by his small equipment now, and wishes he'd followed through on his original intention to buy a 7-barrel system. He's got a lot of fans in Boise and the distributors there want his beer. I told him, "If you upgrade, I'm pretty sure Penny Pink would be interested in your brewhouse."

It's been fun for me to connect people throughout my trip. Several people have told me that what I am doing is cross-pollinating the industry. The funny thing is that "Teresa," my given name (Teri is short for Teresa) is Greek for "Little Harvester," and somebody once told me that the little harvester is a bee. So I'm a bee, cross-pollinating the brewing industry. I like that!

Tyler keeps the business in perspective to his family life by only opening for dinner. Barley Brown's hours are 4:00-10:00 pm. Having one shift makes the busy restaurant easier to manage. 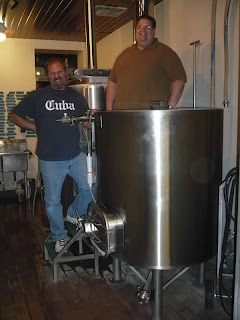 Tyler's brewer, Shawn Kelso, has a day job across the street at the paint store, so pretty much everybody works nights here. Shawn was in the middle of his work "night" and joined us for photos and beers. At the top of this page, Shawn (L) and Tyler (R) stand in front of the blue tape wall.

Because a lot of the brewery photos for this blog have been taken with everybody lining up on the brewhouse steps, I thought it would be funny if Tyler and Shawn lined up on their brewhouse steps too. As you can see in the photo at right, they only have two steps! The mash tun is in front of them, and the kettle is behind them. You can see the second wall of blue tape behind them.

What are those stripes of blue tape? See photo below left for a close up. At the beginning when Tyler was both brewing and running the restaurant, he wanted to keep track of each beer and which tank it was in. So he wrote the beer name, the date, and the starting gravity on a piece of blue tape and stuck it on the fermenter. 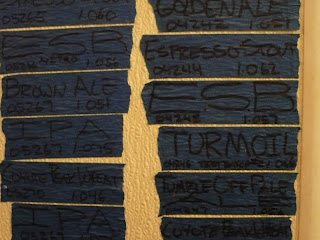 When Tyler transferred the beer to the bright tank, he moved the piece of blue tape too. Once the beer had been kegged off, Tyler wanted to make sure that he wouldn't forget to pay excise taxes, a new experience for a restaurateur, so he stuck the blue tape on the wall. Now there are two walls with blue tape labels on them.

Here is an example if you are trying to read the labels above: the 4th label down on the right is TURMOIL beer, brewed in 2004 and was batch number 246. It happened to be test batch #2 of that beer, and had a starting gravity of 1.066.

Barley Brown's doesn't filter its beers, but they've won a lot of fans. I especially liked their Whiskey Brown Ale, which is made with rye malt and Bamberg rauch malt. Even Paul Shipman of Redhook stopped in and tried the beers. Tyler recalls Paul saying, "I'm going to call my overpaid Brewmaster in Seattle and tell him that a little brewer in 'Podunk' Oregon is kicking his ass." That cracked me up!

One of the signature items on Tyler's food menu is the Mad Pasta. I tried it seven years ago when I visited. It's a curly pasta with chicken and alligator smothered in spicy marinara sauce. You read that right, Alligator. You're wondering where a restaurant in eastern Oregon would source alligator meat? Tyler tells an interesting story about that.

There are natural geothermal springs that feed a few creeks in Idaho. The water is so warm that they farm-raise trout there and the trout grow super fast. Unfortunately the trout create a lot of refuse, so somebody came up with the bright idea that alligators could live in the warm water.

So they put alligators in the geothermal creeks to eat the trout refuse. The idea was to sell the alligator skin for leather goods. The meat is a small byproduct. So, Tyler is buying farm-raised alligator meat from Idaho for $14.99 a pound wholesale. And his customers love it. (I tried it -it has the texture of chicken with a fishy flavor.)

Since I'd already tried the Mad Pasta before, I had the Chicken Fajitas tonight. They were good. After a full round of beers and a full tour of the brewery, Tyler gave me a lift back to his house.

I planned to sleep in my trailer because they have a dog and I'm semi-allergic, but it was so dang cold out I was certain my battery would go dead in the night (and therefore my mattress pad heater) and that I'd move inside anyway. Therefore I slept in the spacious basement guest room that Tyler offered me. He said their old dog never went down there anyway.
Posted by Teri Fahrendorf at 9:08 PM