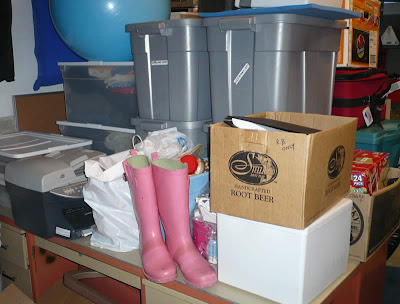 October 20: Jon worked this morning, so I occupied myself at the BrewCraft apartment that he and the visiting out-of-town managers shared. BrewCraft USA has a huge reference library and two of the cheese books from it were sitting on the coffee table. I've been curious about cheese making for some time.

Sounds funny considering I am allergic to cheese. (Makes me feel bad but doesn't kill me.) Jon is a great cheese taster, and I can have just that - tastes. What can I say? I love fermenting stuff and cheese is fermented too. 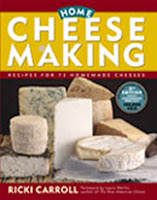 I became entirely engrossed in this book, "Home Cheese Making," by Ricki Carroll (right). I devoured it sitting in my pajamas on the sofa. What else was there to do in a hotel-ish apartment with no TV when it's raining and my van and trailer are over at BrewCraft?

I'm from Wisconsin and I'm definitely making cheese curds soon. No recipe specifically for cheese curds in this book, but I emailed Ricki's staff and I've got a recipe now. I'll be chronicling my cheesey (and other delectables) adventures in my e-newsletter, so if you want the scoop, please sign up for the newsletter.

Note: The first Road Brewer Ramblings went out on November 2nd. If you missed it and want a copy, be sure to sign up for the newsletter, and then email me that you want me to send the first one that you missed. (teri @ roadbrewer . com)

Jon returned at 2:00 pm. We went to the Old Country Sausage Company, (German deli with homemade sausages) for sausages and Franziskaner Hefe Weisse for lunch. Both sausages and bier were great. We got some of their Black Forest Ham to take home. It was excellent and rather dry, more like a prosciutto than our watered-down American ham.

We drove around the NE quadrant of Portland so that we could figure out what neighborhoods we liked. We want to live within easy commute distance for Jon, but not too far away from downtown where my job might be. We liked the Alberta District and Beaumont Village. As we drove around we noticed zero "For Rent" signs. Jon commented that maybe it's illegal to put them up. We found out that Portland is such a tight rental market now, that there are almost no rentals. Here's a link to the Portland Oregonian article on the rental market.

Drove home in a drizzle. I thought it appropriate to end my trip following Jon home in the rain, as he had followed me to Bend in the rain. Bend was the first stop on my trip. Once again I had plenty of "head time" as the radio was broken and it's a two hour drive from Portland. I reflected on now that my trip was ending, my summer vacation as the Road Brewer was also ending.

But something is different from when I was on my 5-month road trip. In Oregon I'm just another Oregon brewer. Nobody here will think of me as the Road Brewer first. Here I'm just ordinary Teri, formerly of Steelhead. And what's with those pink boots? She never used to wear those!

We got home at dusk and immediately invited our favorite former neighbors, George and Alice, over for Sunday dinner. I hadn't cooked in awhile so I was into the idea, in spite of just walking through the door. I started a loaf of bread dough to rise overnight, and was happy to sleep in my own bed. See website for final numbers and statistics from the trip.

On Sunday morning we quickly unloaded both the van and the trailer as Jon's plan was to drive both back to Portland after dinner Sunday night. We live on a narrow alley and there's no room here for Big Buddy at all. Everything in the van and trailer got chucked in the garage, just piled up on Jon's desk. (See photo at top of page.)

Now, while we were all off enjoying the road trip (you vicariously), Jon switched jobs, started his new job two hours away on September 10th, and found some friends in Eugene that needed a place to live.

When I was home briefly in August, the house was as I'd left it: our home on one side of the duplex, and our offices and a graduate student studying for her masters degree on the other side. (Chelsea is a friend of Jon's mother and is from Jon's home town in Michigan.) 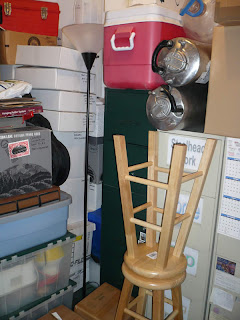 Our other friends and their baby needed a place to rent while their new house is being built.

Thus Jon moved both our offices, our second "project" kitchen (hey if you live on both sides of a duplex, you use both kitchens), 1.5 bathrooms of stuff, all the stuff in that garage, and about a million books over to our side of the duplex. Then our friends and their baby moved into that side.

Lest you think these are large duplexes, this side (the bigger side) is 890 square feet. Jon did a good job of jamming it all in.

Unfortunately there's no place for me to unpack. Until we move to Portland, I am camping at home more than I was when I was on the road. Everything in the house has been rearranged (in order to jam it all in) so I don't know where anything is. Just found some CDs the other day, so for the first time since Denver I have music.

The photo above left is from a small room off the garage. You don't want to see our living space as it's a bit cramped, but I'll describe it. Our small living-dining room now contains two desks (one for the graduate student), a sofa and loveseat, a 36-inch dining room table, four bookcases, a coffee table, four chairs and three rocking chairs. There's not much room to walk and I use the kitchen table for my laptop office.

Now you're thinking we were nuts for inviting our old neighbors over for dinner. At dinner Jon sat at the kitchen counter and George sat on the loveseat which was pushed up to the table. He and Alice don't mind because they know the food and the company will be good. I served fresh bread hot out of the oven, rosemary roasted potatoes (three kinds of potatoes from Idaho brewer Penny Pink's garden), lemon-grapefruit-garlic chicken thighs slow-cooked in the crock pot, and marzipan cake from the German deli for dessert.

After dinner Jon departed for Portland. He took the van but managed to find a business down the street that let him park Big Buddy in their gated lot for a month. 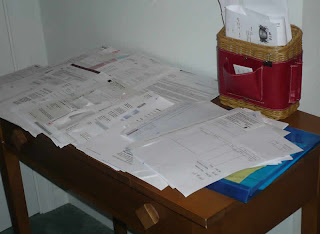 On Monday I faced our crowded house alone after our graduate student left for class. The reality check was this: a small desk in our bedroom covered in bills. Jon paid the bills while I was gone, but it is my job to double check his payment and file the bills into tax-appropriate folders. (Photo at right.)

First you're a sun-shiny superhero, then you're a bill filer.
Thank you for joining me on the journey!
Posted by Teri Fahrendorf at 6:43 PM 1 comment:

A Visit to BrewCraft USA 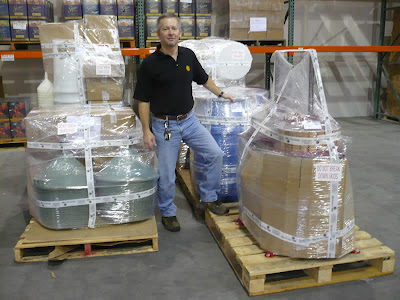 "Every man has his gift, and the tools go to him that can use them." ~Charles Kingsley

October 19: Today I spent the day at BrewCraft USA. My husband Jon Graber is the new Operations Manager here. They just moved into a new warehouse near the Portland airport. BrewCraft sells home brewing, winemaking and distilling equipment, ingredients and supplies to homebrew shops all over the country. Above is a photo of Jon standing with some pallets of goodies about to be shipped out.

And let me tell you about the goodies! What a fun place to walk around. It feels like a football stadium full of tall stacks of all the goodies you could want.

Canned grape juice and extracts from all the grape-growing regions of the world for winemaking. Sacks of malted barley, hops and yeast in the cooler for beer making. 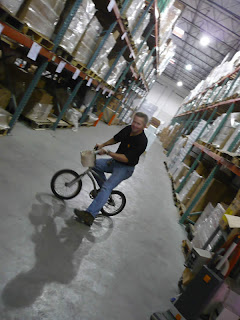 Jon's office is in the front of the building, but sometimes he needs to get paperwork to the warehouse guys in the back. (He actually works all over the building.) He found a little bike at Goodwill to speed across the warehouse to take care of business. He can put paperwork or small parts in the basket. I told him he needs silk hop vines to decorate the basket and he agreed.

I spent most of the day looking up rental companies online and checking Craig's List for house rentals. I couldn't update my blog because all my photos are on my laptop and I couldn't plug into BrewCraft's secure network.

I did unload the beer that I've been collecting on my trip. I separated out one bottle of everything to share with Jon once we move to Portland. That makes up about 2/3 of this stash. 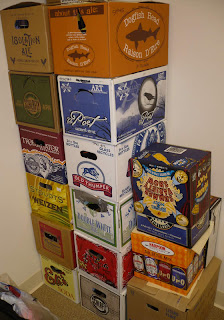 Somehow I managed to fit all 14 of these cases shown at right either under one bench seat or under the trailer's table. I collected them from whichever among the 71 breweries I visited that was able or willing to share with me.

I couldn't put any beer in the van because the van got too hot. The trailer stayed a lot cooler because of the vent on top and the high ceiling (compared to a Chevy Astro Van).

About 1/3 of this beer is made up of mix-and-matched six-packs for my continuing brewery visits. I've been dropping off a mixed-six pack at each of my stops. The craft breweries gifted me bottled beer to go so I could spread the wealth, and the brewpubs bought me meals. It's been a very special trip!

I also unloaded the Stranahan Whiskey barrel. We put it in a corner of BrewCraft's warehouse. No sense bringing it home to Eugene just to move it back. Jon plans to enlist Wyeast to brew a Porter into it, in exchange for getting some of the whiskey-aged Porter back. Sounds like a win-win to me.

Tomorrow I will finally be home from my trip: 139 days!
Posted by Teri Fahrendorf at 6:04 PM 2 comments: