"A friend is a gift you give yourself." ~Robert Louis Stevenson.

The Washington Brewers Guild puts on a remarkable festival. It is small and attended by devout beer aficionados. The beers are each unique and of high quality. It reminded me of the early days of my brewing career when passionate brewers poured their own beers and festivals were small, fun, and impactful.

But the reason I went there was to see my friends.

I was too busy over the last year: maintaining the responsibilities of my old post, the mostly administrative Brewmaster of all three current Steelhead locations, as well as my responsibilities as Eugene’s Head Brewer of production. Many times it was difficult to be in two places at once concerning both my jobs, but I did my best to deliver my best. That meant I attended very few beer events last year.

Although (I think) this was the 8th year, I had never attended the Washington Cask Beer Festival. It was raining in Seattle almost the whole time, but that didn’t dampen my enthusiasm for seeing and hugging my old pals, including the fine brewers shown in the above photo. (L to R) My husband Jon Graber of Wyeast Labs, Skip Madsen of Water Street in Fort Townsend, myself, Dick Cantwell of Elysian Breweries, and Kevin Forhan of the newest Elysian incarnation. 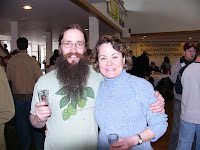 There is a strong Pike Brewery - Big Time Brewery - Triple Rock Brewery connection among us. In fact, the Head Brewer position at Big Time has been a musical chairs experience for some of the Seattle brewers. Currently Bill Jenkins (photo on right) sits in the hot seat at Big Time.

My favorite beer you ask? Sorry, I can’t choose among my friends. You’ll have to attend next March and taste them yourself!
Posted by Teri Fahrendorf at 4:08 PM No comments:

"Go to the edge of the cliff and jump off. Build your wings on the way down." ~Ray Bradbury

This photo is from my Farewell Party at Steelhead on March 8th. About 70 people came to wish me well. We had lots of toasts, including several to my boss of 16.5 years. He generously paid the bill for the party, even though he couldn't attend. It was all quite surreal with people congratulating me on quitting.

I've had an amazing career at Steelhead. I gave loyal dedication and all my creative juices to ensuring its success for more than 1/3 of my life. I sometimes felt like the five Steelhead breweries I built were my children. It was very hard to see two of my children die when those locations were closed down due to lack of business. It was hard letting my brewers go. My boss reminded me it was harder to take out a loan that he is still paying the payments on, in order to relinquish the businesses debts. My personal connection to Steelhead was emotional, not financial (other than my paycheck).

At 5:15 pm on my last day my husband, Jon Graber, picked me up from work. I stood in the parking lot with my little cardboard box containing my rubber boots and gloves. The rain was cold and drizzly wet, the sky an overcast shade of medium gray. I saw Jon pull up and my lip quivered. As I got into the car I couldn't hold it anymore. I cried my eyes out. It was the end of an era, the end of one major chapter in my life. I can't deny that.

The next day dawned bright and sunny. We departed for the Washington Cask Ale Festival at 7:00 am. The next chapter was beginning... with a road trip!
Posted by Teri Fahrendorf at 1:10 PM No comments:

Brewers Are The Nicest People 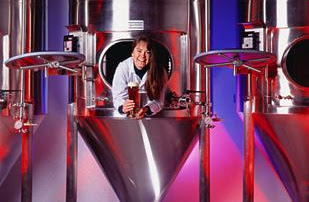 "There is no beginning, no ending, only the infinite passion for life." ~Frederico Fellini

Besides wanting to brew-on and see lots of different brewing systems and to visit my brewing friends, I am looking forward to making many new brewing friends on this trip. It looks like I’ll have ample opportunity as lots of brewers or brewing industry contacts have invited me brew and/or visit.

I’ll probably start planning my trip in April or May. I haven’t been unemployed since 1989, so I don’t remember what it’s like to not have a schedule.

Well, I do have some minor plans during the first two weeks:

1.) Attend the Washington Brewers Guild cask festival, and
2.) Brew with Jess Caudill and Greg Doss, the brewer/microbiologists at Wyeast Laboratories where Jon works.

Please check back here for photos of both these events.

P.S. This glamour shot was taken at Steelhead's Burlingame location in January 1995, while the new tanks were being installed. The photo was published in the short-lived glossy magazine, "Juice," and was taken by Kent Marshall Photography of San Francisco.
Posted by Teri Fahrendorf at 4:27 PM No comments: