How I Became a Brewer - Part 1 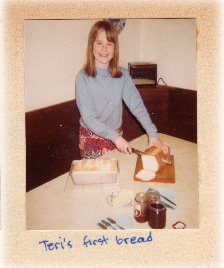 Somebody at the CBC in Austin asked me how I became a brewer. When I told him, he said, "That's a great story. You should put that on your blog." So here it is...

When I was nine years old, my family attended our church's rummage sale at St. Pius X in Wauwatosa, Wisconsin. I was so excited when I found a small blue booklet titled, "How Beer Is Made," that I gladly parted with my weekly allowance of one dime. At home, I ran to the bedroom I shared with my sister and flounced on my bed, not even removing the black patent leather shoes I'd worn to mass. I opened the booklet and held my breath, certain with sweet anticipation that I'd soon learn the secret of making beer.

At nine I loved beer, and knew it was important to my parents and all my relatives. I grew up in a German family outside Milwaukee, Wisconsin. At family reunions, my relatives soothed the babies with a teaspoon of beer. At home we had "Beer & Pizza" night once a month. Our normal dinner beverage was 2% milk, but once a month we had the added choice of Coca-cola or beer, and we always went for the beer. Once when I was 12, our family went out to Balistreri's Pizza in Milwaukee. My father ordered a pitcher of beer and 6 glasses. The waitress questioned him, as there were only two adults at the table. Pop said, "Either you bring six glasses, or they'll drink out of ours." We were ages 6, 8, 10, and 12. I learned a lot just hanging around my parents.

As I pored over my precious blue booklet, I deflated quickly. The diagrams showed enormous equipment. It was apparent one could only make beer in a factory equipped with cereal cookers and mash presses. That was a huge disappointment. However, I did get to see that enormous equipment a few years later: My girlscout troup took a tour of the Miller Brewing Company. The girl scouts should continue that tradition - maybe there would be more female beer drinkers and brewers.

I don't know what happened to my little booklet. I wish I had it now. I found an exact copy in 1993 in Seattle on the bookshelf of my friend and fellow brewer, Ed Tringali. Ed splits his time now between Long Island and Maine. I hope he still has that little booklet. Somebody told me it was probably an informational booklet that Miller put out in the 1960's. That may be true, but it didn't help me in my early quest to mess with yeast and "make stuff."

My next attempt at fermentation would prove much more successful. At ten I made my first two loaves of homemade bread. My parents were out at an antique show while I kneaded and raised the dough. I had to wait until they got home to bake the bread because I was too young to use the oven without their supervision. This photo is of those first two loaves. Nobody in my family had ever made bread (or beer), but I was a determined kid.

You'll notice that the loaf on the left in the pan is a sickly pale shade of tan. That was my father's advice: to underbake one loaf, and bake it the rest of the way another day and then we'll have fresh bread again. Bad idea. Sometimes I learned good things from my parents, and sometimes they gave me dumb advice. But I'm lucky, I still have both parents, so here I am listening and learning (and discerning for myself).
Posted by Teri Fahrendorf at 1:12 PM No comments: