Drive: Baker City, OR to Portland, OR 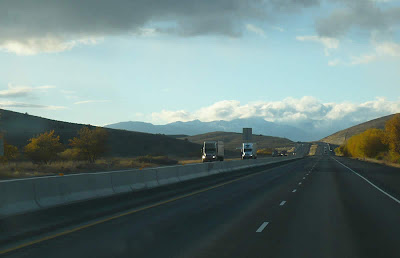 "We are made to persist. That's how we find out who we are." ~Tobias Wolff
October 18: Tyler made me a cup of tea and we sat in his kitchen and chatted beer. Being able to relax with other brewers and talk shop has been one of the many highlights of my trip. We checked the weather reports on the Internet often as the segment of Highway 84 between La Grand and Pendleton, Oregon, would be one of my toughest driving segments of the trip. Winter has arrived just as my summer vacation is drawing to a close. 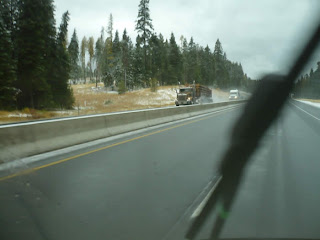 There was snow on the side of the highway, and heavy winds plus rain and sleet. Just what I expected. Once I was past Pendleton I could relax a little.
The terrain is more varied here than it has been for most of the drive since I left Denver. I've been putting lots of miles on the van as you can see by the number of gas fills on the trip totals list on my website. At this point I am definitely like the horse that smells the barn at the end of the day and wants to go home.
In the photo at left, you can see a big logging truck moving toward me as my windshield wipers go. Yup, back in Oregon!
A little past Pendleton and Highway 84 hugs the south bank of the mighty Columbia River. In ancient times during the ice age, a glacier blocked the river upstream until a huge lake grew behind the ice dam. When the ice dam broke, such a huge serge of water flowed through the river's original small channel that it carved out the Columbia River Gorge. You can see one of the bluffs on the Oregon side of the river in the photo at right. 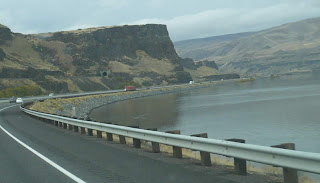 Yes I took these photos while driving down the highway. I felt my journey drawing toward a conclusion and I wanted to document some of what I saw from the road.

I arrived at Jon's work, Brewcraft USA at the end of the work day, one day earlier than originally planned. I had a lot of long driving days this week, but I was really ready to get back and see Jon.
BrewCraft USA bought F.H. Steinbarts Wholesale a few years ago, then sold the brewery wholesale side to Brewer Supply Group. Now BrewCraft just wholesales to homebrew shops.
BrewCraft just moved into a new warehouse in August, and a floating manager from out of town, Ginny, has been there to help with the transition. Ginny's husband, Rob, was visiting so Ginny, Rob and Jon & I went to the McMennamin's Edgefield complex for dinner at the Black Rabbit Restaurant.

If you've never been to a McMennamin's establishment, you're in for a visual treat. The McMennamin brothers employ a whole cadre of artists to embellish to their hearts content. As we waited to be seated, I glanced up and noticed this sprite peering down at me from a water pipe elbow up near the ceiling. If you go there and want to see it, stand at the entrance to the Black Rabbit Restaurant, turn around and look back down the hallway and look up to your right.
Rob was quite impressed with Edgefield as most visitors are. I often describe it as "Disneyland for Beer Drinkers." Not only is it visually strange and fantastic, there's also a brewery, a winery and a distillery on site, a movie theatre where you can sip beer while you watch, and many small and unique pubs, taverns, cafes and restaurants, so you can take your pick of where you want to imbibe.
Then it was back to the apartment that Jon has been staying in since he started his new job. We left Big Buddy and the Astro Van parked at BrewCraft tonight.
Posted by Teri Fahrendorf at 9:42 AM

Congratulations, you made it Teri!!! What a week of driving - That van of yours is a trooper. Nice ending with Engefield - I love that place. So glad you're safely home. ~Rich

It's been a long journey for sure. But I think you enjoyed it a lot.