A Visit to Avery, Left Hand, and Oskar Blues 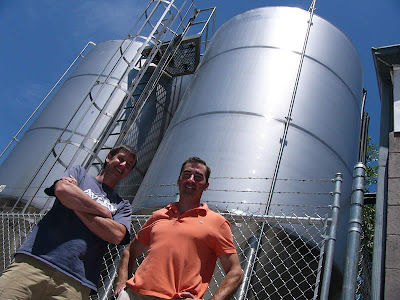 "I am seduced by travel." ~Charles Kuralt

June 25: A long day of driving and brewery visits. Started out the morning at Avery Brewing Co. in Boulder. (Photo above: Steve Breezley and Adam Avery.) Steve gave Jon and me a custom tour of Avery's patchworked and ever-growing brewery. It's an inside joke that Avery will be moving to a purpose-built new building in two years. They've been saying that for many years now.

Steve's tour ended in the new tasting room. We got to try some of their experimental beers from wooden casks including a version of Salvation, Avery's Belgian Golden Ale, that had been aged in a Sauvignon Blanc keg. Hearty, tart, and tasty. I've been waiting for somebody to experiment with white wine kegs. If Avery hadn't done it, I'd have to do it. I still might do it if I get the chance. A big thanks to Steve and Adam for loading us up with a mixed case of Avery's finest. White Rascal Wit was great on such a hot day. 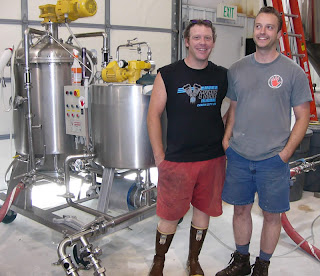 Next stop was Left Hand Brewing Company in Longmont. (Photo at right: Joe Schiraldi and Andy Brown) Joe and Andy tag-teamed on a tour because Joe was busy with his filter. We got to taste several beers including a nice Milk Stout. 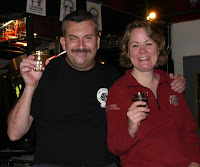 Time for lunch, so a stop at the Pump House Brewery, also in Longmont. The brewer wasn't in, but we ran into Greg Nowatzki (photo left) of Las Vegas.

Greg and I were featured on the 2002 GABF (Great American Beer Festival) program that aired on the Food Channel. Even though we were both on the same film, we had never met, but I recognized him sitting at the bar. Of course Greg had his 3-ring binder listing every beer he'd ever tasted. In 2002 he was up to over 4,000 beers, now he is up to over 9,000 beers. It turns out that Greg is a fellow Wisconsinite - originally from Madison.

Left the Pump House Brewery and returned to our van and trailer to find that Longmont's Finest had left us a ticket. Notice the nice diagram in the lower left corner showing how we had parked and taken up three parking spots. (Gee officer, we could have taken five spaces, but we were trying to be courteous.) 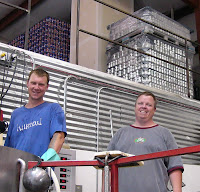 Next it was off to Oskar Blues in Lyons. When I first sent out the notice that I was departing on this trip, marketing man Marty Jones called me to make sure I had received his email invite. Marty couldn't meet us today, but brewers Mike and Eric gave us a tour. (Photo at left: Eric Huber and Mike Hall.) I'd been wanting to see their canning operation for a long time. Note the pallets of cans stacked behind Eric and Mike in the photo. 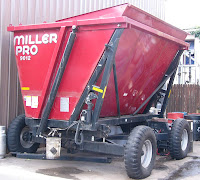 Both Oskar Blues and Left Hand had a neat contraption outside their breweries that I'd never seen before: A big wheeled spent grain dumper. (Photo at right.) Seems like a good idea to me.

Last was the drive up hill to Estes Park to visit Jon's old pal, Baby Kay and her family. Baby Kay is all grown up now, and so are her two babies. Dave grilled burgers, and we sat outside on a balmy summer eve on the edge of Rocky Mountain National Park in their back yard and enjoyed a few of the beers we'd collected. What a nice end to a brewery-filled day! 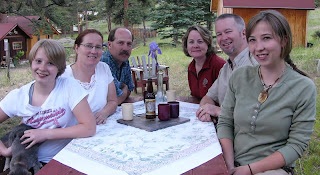