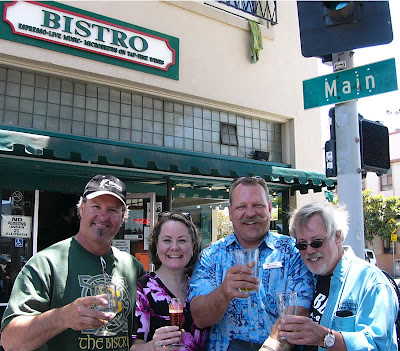 "There are no shortcuts to any place worth going." ~Beverly Sills

June 11: Spent most of the day in the subterranean offices of Tom Dalldorf's Celebrator Beer Newspaper. Tom worked on editing some neat beer festival videos for the Celebrator website, and I worked on this blog.

Mike Pitsker joined us in Tom's cave for a beer tasting. Mike brought the mixed 6-pack of cans of Maui Brewing Company beers. We tasted the Bikini Blonde Lager (hazy with fruity ale-like esters but lager flavor), Big Swell IPA (coppery with a murky haze and big resinous hop aroma and flavors), and CoCoNut Porter (more chocolate on the nose with forward raw coconut in the flavor). Then we escaped to the surface for fresh air and sunshine.

After a lovely lunch outside at the new, improved and expanded Buffalo Bills Brewpub, we walked across the street to Vic Kralj's famous "The Bistro." Vic was on duty so we had a few tastes of his marvelous draft selection including Green Flash West Coast IPA, Green Flash Double IPA, and Russian River Blind Pig IPA. We joked that the average IBU of the beers Vic had on tap must be 60 IBU or more. (Photo above L to R: Vic, Teri, Mike and Tom.)

Luckily we only had tastes, as next it was back into traffic for me, heading to San Jose.

P.S. Thank you to Tom Dalldorf and the Celebrator Beer News for letting me hook into their wireless for a few hours.
Posted by Teri Fahrendorf at 3:53 PM

Teri- It was great spending some time with you and Tom yesterday afternoon. I hope you stop by on your way back home. -Mike Pitsker