Drive and Visit the World's Largest Beer Can Collection 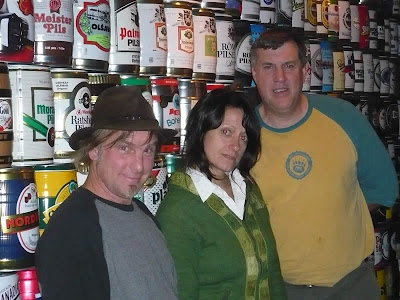 "It is best to do things systematically, since we are only human, and disorder is our worst enemy." ~Hesiod

September 18: Worked on computer work at Dogfish Head. Finally left about 4:00 pm. That gave me a sunset view drive west from Milton, DE to York Have, PA. Yes, I am finally heading westward, and like a horse at sunset, I know where my home is and I want to go there.

As I drove from Oregon to Maine, beginning this trip on June 4th, I've watched the corn grow taller along my route. Now I am watching the corn stalks dry out, fall down, get burned down, or turned under. Driving from Vermont down to Connecticut I've watched the Fall colors pop out on a few trees here and there. Now I'm seeing the pumpkins along the road.

I drove from Delaware into Pennsylvania, and as soon as I entered Lancaster County, the air reeked of manure. Not the city of Lancaster, just the countryside. This is Amish and Pennsylvania Dutch territory. I drove across Lancaster County of Route 30, before it turns into a freeway. I saw five Amish buggies, each different from the others. One was open and held an old man, old women, and two children. The blonde-haired black-bonnetted little girl turned around as we were all stoped for a traffic light. I waved at her and she waved back. All the other buggies were closed with roofs, and a few had glass windows. I wondered if Amish teenagers have to get a buggy driver's license when they get 16? They need to know the rules of the road just as much as any other driver.

I continued westward as the sun set. I passed a big field of yellow large-leafed plants being harvested by an extended Amish family, kids and all. It was a field of tobacco. The Amish are considered hard workers. They seem to work from sun-up to sun-set, rain or shine, and can put up a whole building in about a day.

I passed a highway entrance marked, "Oregon Pike," and I thought, Oh wouldn't it be nice if I could zip onto that highway ramp and be home in an hour? I miss home.

I arrived at the homes of Jeff and Lauri Lebo well after dark. Luckily they had given me good directions as I sure don't like driving after dark in strange territory. I pulled up the darkened driveway and saw a soft glow through the windows of the big house, reflecting off the colorful beer cans lining the walls. A teaser for what was to come. Jeff stepped out of the house to greet me.

Jeff's father worked for American Can Company for 40 years. Visiting his father's place of employment as a child, Jeff developed an attraction for the colorful utilitarian storage vessels. Jeff began collecting beer cans at 14, and stored his steel and aluminum treasures in his mother's attic. Once he and Lauri got engagaged, Jeff began drawing up designs for a house to display his cans. He poured the foundation the week of their wedding. Jeff and Lauri built "the can house" themselves. It's a big house in the country right next to the little house they live in.

As you can see in the photos on this page, nearly every inch of wall space is used to display Jeff's 56,000+ can collection. I asked Jeff if he has documented each can in a computer database or something, and he replied that he keeps track of which cans he has, by knowing which cans he doesn't have yet. In other words he has nearly complete sets of every variation of every beer can ever made anywhere. OK, maybe not every single can in the world, but he's working on that.

The photo below was taken in the guest bedroom, "The German Room." The sliding display walls are typical of the house, and there are up to two levels of sliders in front of the actual wall. The guest bed in this room is parked in the middle of the room and not pushed up against the wall. You wouldn't want to squish a can with your pillow, and you need to be able to see each can. 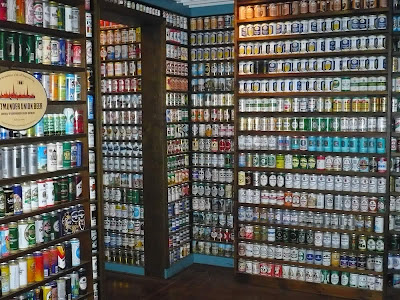 There are five can rooms upstairs, as well as a bathroom. Every room on the first floor contains cans on the walls except the bathroom and the big country kitchen. The kitchen contains an antique squat-sized coffee can collection. Jeff must be good at math: All the cans are displayed on exactly measured shelves. Cans of similar build and height and width are displayed together by country and brewery. There are no gaps, so I know he measured well!

By day Jeff is a landscape contractor. Jeff is also a professional musician who records under the moniker "Jefferson Pepper." His CD "Christmas in Falujah" is available on Amazon.com, and he is in the middle of his next musical project, a 3-CD set called, "American Evolution."

Lauri is also a passionate artist; she's a journalist by trade and an author. Her book, tentatively titled, "The Devil in Dover," will be published in Spring of 2008 by The New Press, an alternative non-profit press out of New York. While she was an investigative journalist, Lauri documented the "Intelligent Design" legal case in Dover, Pennsylvania. She travelled to and researched the many Creationist "Empirical Evidence" pseudo-scientific Museums in the south, and was duly inspired to get her first tatoo at the age of 42: of the Flying Spaghetti Monster. (May his noodly appendages reach out and touch you!)

Lauri and Jeff are shown in "The Scandinavian Room" below. 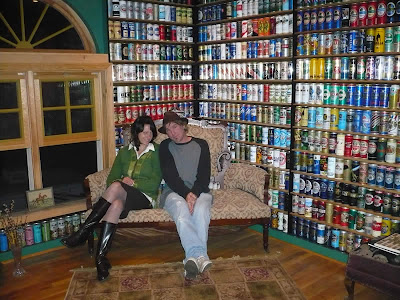 While enjoying the colorful can-filled ambiance of "the big house," Alan Edwards, Brewery Sales Rep. for Appalachian Brewing Company joined us. I especially liked Appelachian's malt-driven "Jolly Scot" beer, which was named after an old Pennsylvanian beer. The photo at the top of this page was taken in the "Big Can Hallway." L to R: Jeff, Lauri and Alan.

We all stayed up too late, chatting around the big farmhouse table that Jeff made from old barn siding. The "Can House" looks like an old antique farmhouse, but it's actually new, built by Jeff and Lauri themselves. It incorporates lots of old barn siding so it looks old, but it was designed just for Jeff's can collection. Now, that's what I call dedication!
Posted by Teri Fahrendorf at 6:39 AM