Road Brewer is BACK! 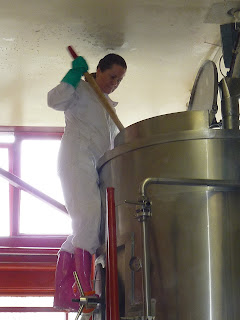 Yes, the Road Brewer is back, but just a little. I've got a lot of catching up to do with you and no time to do it! This photo was taken on March 27, 2011 (two weeks ago), and I'll explain it below. Catching up... Spent a year (2008-2009) as a beer clerk at Belmont Station, one of the West Coast's premier bottle shops. When I helped folks find a long-lost beer I felt like a beer detective; When I matched folks to a new beer they loved, I felt like a beer matchmaker. It was a fun job and I adored my fellow beer geeks that I worked with. I not only learned a lot about what customers ask for and look for in a beer on the retail side, I added to my mental beer database: After 20 years as a professional beer judge and thus judging beers blind out of plain glassware, I had no mental connection between a beer's label and it's flavor. At Belmont Station, I finally made the connections via my employee discount. Let's just say most paychecks never made it home in anything but liquid form. 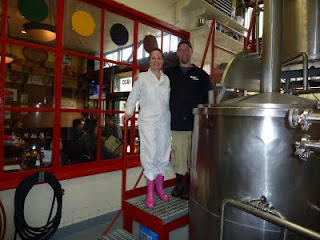 Then in June 2009 I crossed over to the supply side of the beer business at Country Malt Group (Great Western Malting). I'm sure many brewers make the sign of the cross and pray they'll never have to go over to the "dark side," but I love it! What other job will pay you to visit breweries and talk about beer? After 19 years as a brewmaster, I'd seen every inch of the inside of my brewpub fishbowls. Being the Road Brewer in 2007 whetted my appetite for brewery adventures and meeting brewers all over the country. And brewing on their systems with them. Somehow all my life experiences have lead up to this point. 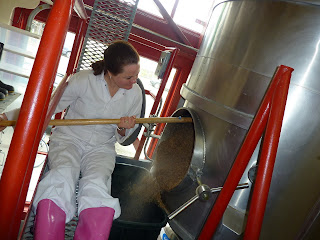 Plus, when I was brewmaster for Steelhead, and in the thick of hiring and training brewers for the new brewpubs we were opening, I got a taste for teaching brewers, and I loved that too. As a supplier of malt and hops to breweries of all sizes, it is the smallest new breweries who need my expertise and help. Since I get a paycheck already, I don't have to charge consulting fees from our customers. I just give them all the free advice they want. My sales job keeps changing and expanding, and the Pink Boots Society (and Barley's Angels) and my wonderful husband keep me very busy when I'm not at work. However, at some point I hope to have time to revive the Road Brewer Project on a more regular basis. I am definitely visiting brewers and breweries, and I'm taking photos. I just haven't had time to write about them. 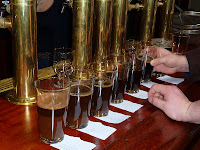 In the meantime, I hope to toss you a big bone once in a while. For example, right after the Craft Brewers Conference which was held in March in San Francisco, I had the opportunity to brew at Triple Rock as a Guest Brewer. 21 years ago I quit my job as Head Brewer at Triple Rock to go to Steelhead Brewing Company. This year is Triple Rock's 25th anniversary. I was the 2nd Head Brewer in 1989-1990, and the third person to be in charge of operations. Co-owner John Martin had the brilliant idea to invite all of Triple Rock's head brewers back as guest brewers. 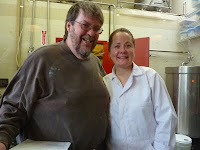 Current Head Brewer Rodger Davis and I corresponded via email, and Rodger basically allowed me to write a recipe for any beer I wanted. I thought about reviving an old Triple Rock recipe, but decided it would be more fun to stretch my envelope-pushing muscles. So I designed a beer that I believe had not been brewed before: Porcini Porter. Triple Rock's Blog: http://triplerock.com/?page_id=12. My photos from Porcini Porter brew day http://photobucket.com/Triple-Rock-3-27-11. The beer was designed to be malty, but it ended up with lower gravity and therefore much drier than desired. Nevertheless, because I only hopped the beer to 45 IBU, I am hoping that it is still a balanced beer with yummy earthy mushroom character. 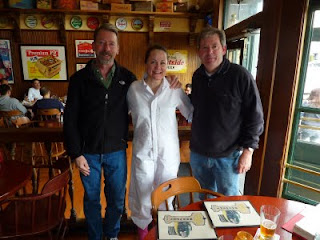 Since this beer was brewed two weeks ago, it should go on tap at Triple Rock this week. You can call Triple Rock and ask if it is on tap yet: 510-843-2739. So cheers! I'm back. Not often, but if I am lucky enough to find time to guest brew, I will try to post here. Thanks for tuning in! Folks in the Photos top-to-bottom: Teri, Rodger Davis, Todd Ashman, Reid Martin, John Martin.
Posted by Teri Fahrendorf at 8:52 PM

Very cool Teri, must have been a real trip down memory lane! I love Triple Rock, I got to stop in there this last February.